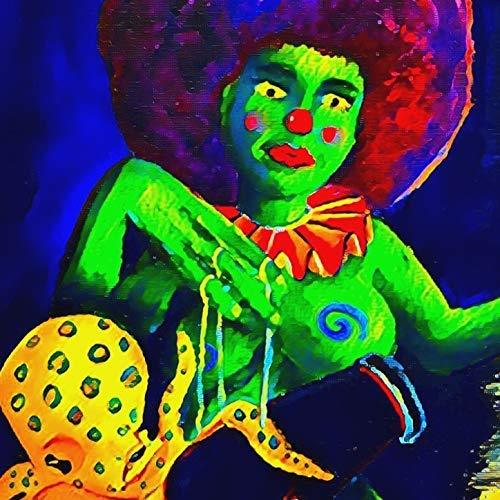 The composer and producer of instrumental fusion known as Too Much Not Enough has released his latest official EP album, “Anxiety Circus.” The EP concept album contains five original Too Much Not Enough tracks for an approximate total listening time of twenty minutes. It has been proudly published as an independent release without the involvement of the corporate music industry. Surprising, kaleidoscopic, and far more fun than any instrumental record in recent memory, “Anxiety Circus” showcases Too Much Not Enough as a remarkable inventor of melodies and sonic narrative for 2018 and beyond.

Austin, Texas’ Too Much Not Enough cites as main artistic influences Tortoise, Björk, Propagandhi, Tears for Fears, John Scofield, Between the Buried and Me. Too Much Not Enough’s own sound takes elements from each of these and adds something fresh and unique for a result unlike anything today’s music fans have heard before. With an emphasis on creativity, “Anxiety Circus” by Too Much Not Enough has a little something for every avid fusion music listener.

Commenting on the overall meaning of “Anxiety Circus,” Too Much Not Enough implies that he has acted as a sort of radio receiver for the record, rather than its chief orchestrator. He writes of this: “The album is a statement from benevolent, otherworldly beings who are reporting back to their home about the emotional and spiritual condition of the human race. They were sent to Earth to explore and to decide whether or not it’s viable or wise to interact with humans in an effort to grow and advance the universe’s sentient community.”

Asked to elucidate, he writes, “Their main takeaway is that humans are at great risk of collapse due to a combination of tribalism and overconsumption, both fueled by anxiety. While the aliens see potential in the human capacity for love, anxiety is clouding out humanity’s sense of connection to one another and putting the rest of the universe at risk.”

The manner in which “Anxiety Circus” plays out also tells part of the tale.

“For ‘Anxiety Circus,’” TMNE writes, “they used mostly terrestrial instruments to convey their observations of humans, generally focusing on those with power and means. They come in peace and want a relationship, but the destructive anxiety of the population is keeping them back, for now.”

“Anxiety Circus” by Too Much Not Enough is available from over 600 quality digital music stores online worldwide now. Get in early, fusion and experimental music fans.

“Anxiety Circus” by Too Much Not Enough –