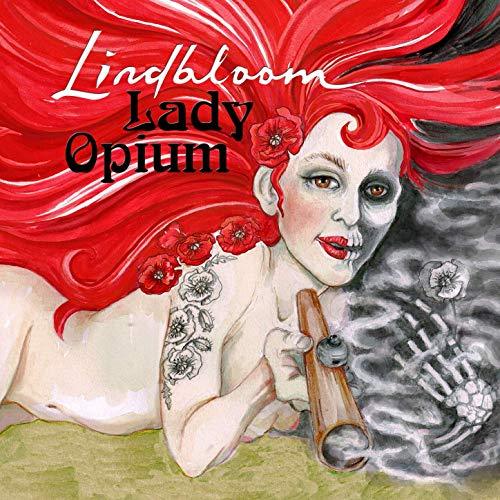 The songwriters and producers of rock known as Lindbloom have released their latest official album, “Lady Opium.” The album contains eight original Lindbloom tracks for an approximate total listening time of 35 mins. It has been proudly published as an independent release without the involvement of the corporate music industry. Funky, riffing, and surgically precise in its musicianship, “Lady Opium” showcases the Lindbloom crew as one of the most intriguing rock groups of the year so far and promises that they have plenty more where that came from.

Much about “Lady Opium” and Lindbloom (often stylized LindblOOm) can be understood by noting the legendary pedigree of the band members. Göran Edman provides vocals (Yngwie Malmsteen), Morgan Ågren beats percussion (Frank Zappa), Samuel Olsson performs on keys (Joe Lynn Turner) and Jonathan Olsson slaps very prominent bass lines (Dynazty, Pain). The band is headed by guitarist Magnus Lindbloom, for whom “Lady Opium” is his first solo LP record. His musical vocabulary and technique have been celebrated by none other than guitar virtuoso Greg Howe.

The result of this veteran melange sounds much like one might imagine: classic prog rock performed with the mindset of jazz players. To put it another way, Lindbloom sound like Robin Trower, Grand Funk Railroad, or a pared-down Mahavishnu Orchestra, but updated for the 21st century and a great deal less ostentatious. They have been described as, “the real deal. Genuine and unique handcrafted music extracted from real life with no safety nets or ready-made templates. Open your heart and soul and let Lindbloom’s music speak to you.”

Stockholm, Sweden’s Lindbloom cite as main artistic influences Led Zeppelin, Rival Sons, Deep Purple, Fu Manchu, John Coltrane, Cobham, and (yes) Mahavishnu Orchestra. Lindbloom’s own sound takes elements from each of these and adds something fresh and unique for a result unlike anything today’s music fans have heard before. With an emphasis on pristine performances, expert songwriting and undeniable emotional effect, “Lady Opium” by Lindbloom has a little something for every rock fan.

Asked to describe the overall meaning of “Lady Opium,” Lindbloom’s label responds, “When we become one with Lindbloom’s music our pain becomes easier to handle, our laughs get louder and our love stronger. Together we recognize and understand ourselves and can share our inner love with each other.”

“Lady Opium” by Lindbloom is available from over 600 quality digital music stores online worldwide now. Get in early, rock fans.