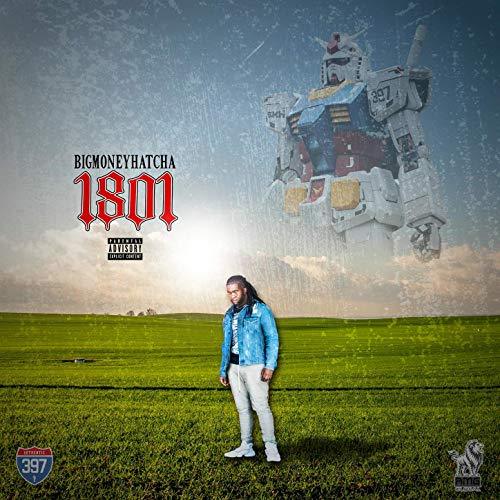 The songwriter and producer of rap and hip hop known as BigMoneyHatcha has released his latest official album, “1801.” The album contains 12 original BigMoneyHatcha tracks for an approximate total listening time of half an hour. It has been proudly published as an independent release without the involvement of the corporate music industry on the AMGGlobal label. Part party, part gangsta, part straight-up hip hop, “1801” showcases BigMoneyHatcha as one of the most intriguing rappers of the year so far and promises that he has plenty more where that came from.

“I would say the entire SWISHAHOUSE movement influenced me,” he writes. “Old Gucci Mane literally has the best street music I’ve ever heard. Future had a huge influence on my harmonizing – he made it dope to sing, Lil Uzi Vert also is the best rapper out right now.”

BigMoneyHatcha’s own sound takes elements from each of these – perhaps most obviously his use of actual singing in his songs – and adds something fresh and unique for a result unlike anything today’s music fans have heard before. With an emphasis on expert songwriting and standout back beats, “1801” by BigMoneyHatcha has a little something for everybody.

Asked to describe the overall meaning of “1801,” BigMoneyHatcha writes, “1801 (my album) is just a great blend of Southwest trap and real heartfelt music. I have my own sound and I guarantee this project will have you wanting to hear from me.”

“1801” gives the listener the clear impression that Hatcha has been eyes-deep in the scene for much of his life. It’s not surprising to discover this is so.

“My older brother was involved in music and I would sit in his studio sessions, the energy around him and his friends was great – it was something I had never felt before! I knew every word to all the songs they made. I was around 11 or 12 so besides sports I knew music was something that would always be there for me. Fast forward to my college football days I noticed myself writing more and more music and then I started skipping practice to go to the studio we had on campus. I eventually ended up tearing my ACL and I had to stop playing football, so I just started writing 3 to 4 songs a day just to keep my mind off of it. And in 2018 I decided I needed a ‘big boy’ job and I started doing mortgages and I really hated sitting in a desk all day I was literally going crazy and getting fat. One day I got an email after lunch saying come to the training room for a meeting which was normal and they let about 50 of us go. I had a real moment and I asked myself what did I want to do, and the answer was music.”

BigMoneyHatcha was born in Texas and raised in the Southwest. His style has been described as “a unique sound that bangs no matter where you are. Influenced by his birthplace, BigMoneyHatcha puts his own spin on chopped-and-screwed by mixing the original sound with synth and high-pitched beats.”

“1801” by BigMoneyHatcha on the AMGGlobal label is available from over 600 quality digital music stores online worldwide now. Get in early, rap and hip-hop fans.