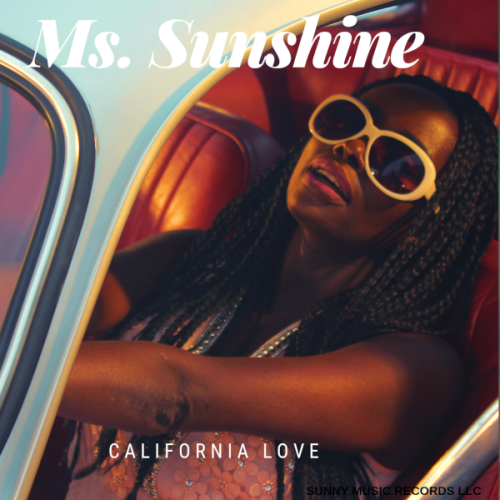 The songwriter and producer of pop music known as Ms. Sunshine has released her latest official single, “California Love.” The single has been proudly published as an independent release without the involvement of the corporate music industry on the Sunny Music Records record label. Upbeat, grooving, and (of course) beaming with her signature friendly disposition, “California Love” again proves that Ms. Sunshine has everything fans of pop music love to hear.

Belgium’s Ms. Sunshine cites as main artistic influences Erykah Badu, Jill Scott, Lauryn Hill, Miriam Makeba, Suzanne Owiyo (Kenya), Muthoni the Drummer Queen (Kenya), the late Oliver Mtukudzi (Zimbabwe), and of course, Alpha Blondy. Ms. Sunshine’s own sound takes elements from each of these and adds her own sunny personality for a refreshingly exotic result unlike anything most music fans have heard before. With an emphasis on danceable beats, happy melody lines, and more of the singer’s usual uplifting, empowering lyrics, “California Love” by Ms. Sunshine has a little something for everybody.

Asked to describe the overall meaning of “California Love,” Ms. Sunshine writes, “Dreams are valid!!!!! No matter where you are from or your background. We have that dream to make it to Hollywood. And Be recognized by the artists and performers that we see and grace our screens, radio and magazines. This is clearly evident by the amount of artists, producers and actors from foreign lands who are now being recognized in the hollywood plattform. And this is not only inspiring for other foreign artists but equally motivational. To ASPIRE FOR GREATNESS.”

Born Catherine Achieng’ Onyango in Kenya, 1981 Ms. Sunshine speaks fluent Dhuluo, in which African dialect her name means ‘girl who is born when the sun is shining.’ She has been writing, recording and performing original music since 2010. Popular singles such as “Riding Low Low” (2017) and “Mama Africa” (2013) continue to bring new fans to Ms. Sunshine’s already exceptionally enthusiastic following.

“I always been passionate for music and dance since young,” writes Ms. Sunshine. “Later on, during my university years, music took a back seat and I passively self-educated myself on the different genres, more so concentrating on ’50s ’60s and ’70s music. At this time, I got an exposure to appreciate and learn some of legendary music’s greatest: Bob Marley and the Wailers, Lucky Dube, Jimi Hendrix, the Doors, John Lennon, Etta James, Nina Simone, Franco, Miriam Makeba, Dinah Washington, Pink Floyd, Sting, and Elton John, just to name just a few who later have so inspired me in writing my own music.”

Ms. Sunshine has described her musical style as “a prime illustration of Neo-Afro Soul, in that it focuses on the contemporary styles of the genres soul, hip hop and reggae, and sends out a deeper message as opposed to common or commercial music. The songs I have recorded so far exemplify my personal take on life. My philosophy features ideologies from my African influences, with fusions from African-centered and Five Percent theologies, the complex views of diverse African cultural theologies and its complex interpretation of such strong cultural beliefs in our modern and evolving African culture. The majority of Ms. Sunshine music is greatly influenced by my beliefs of the Nation of Gods and Earths and my African roots and heritage.”