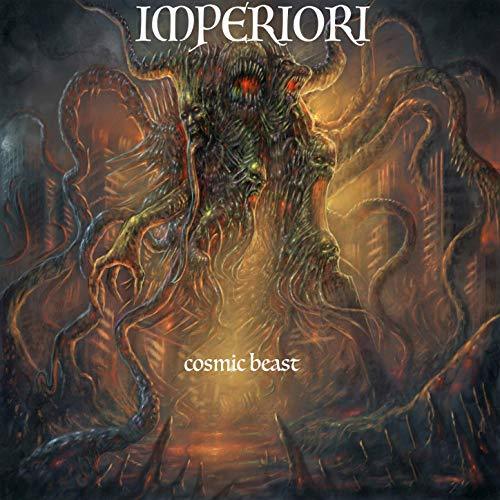 The songwriter and producer of death metal known as Imperiori has released his latest official EP album, “Cosmic Beast.” The EP album contains seven original Imperiori tracks for an approximate total listening time of 25 minutes. It has been proudly published as an independent release without the involvement of the corporate music industry on the Maldito Records record label. Blistering, screaming, and packing a punch like a bolt of lightning, “Cosmic Beast” showcases Imperiori as one of the most intriguing death metal artists of the year so far and promises that he has plenty more where that came from.

Chicago’s Imperiori cites as main artistic influences Judas Priest, Venom, Celtic Frost, Slayer, Sepultura, Dissection, Immortal, Paradise Lost, and Morbid Angel. Imperiori’s own sound takes elements from each of these and adds something fresh and unique for a result unlike anything today’s music fans have heard before. With an emphasis on high-octane percussion, churning guitars and growling, snarling vocal work, “Cosmic Beast” by Imperiori has a little something for every fan of death and speed metal music.

Asked to describe the overall meaning of “Cosmic Beast,” Imperiori writes, “It is the abomination! The Cosmic Beast that comes to erase our world. Feel the aggression. Absorb the mystic power. The sonic darkness speaks in tongues and raptures your soul. Let the darkness take you to your deepest septic desires. A visceral powering attack that leads you to Imperiori – to eternal dark septic death!”

Imperiori (born Alex McIntire, AKA Alex Malas) has said his new “Cosmic Beast” EP was “a septic death metal cleansing.” He goes on to say that his other projects, Warfilth and the popular Chicago-based death-metal band, Malas, had been keeping him busy enough, but that these tracks had somehow gotten into his head and needed expression.

“This was just a sonic purge from my dark septic realm,” Imperiori writes. “This started mid- Aug and finished in late Oct with me finally saying ‘I’m done.’ I’d work on the record after work or on a day off for a bit. This is the fastest body of work I have ever created. Everything was written and preformed by me. All arrangements, guitars, bass, drums, vocals, lyrics, concept, recording and production by Alex McIntire. Thank you to the amazing Tata Kumislizer for his talent on the cover of ‘Cosmic Beast.’ I’m putting together a touring band and hopefully you can catch us on the road.”

“Cosmic Beast” by Imperiori on the Maldito Records” label is available from over 600 quality digital music stores online worldwide now. Get in early, death metal fans.